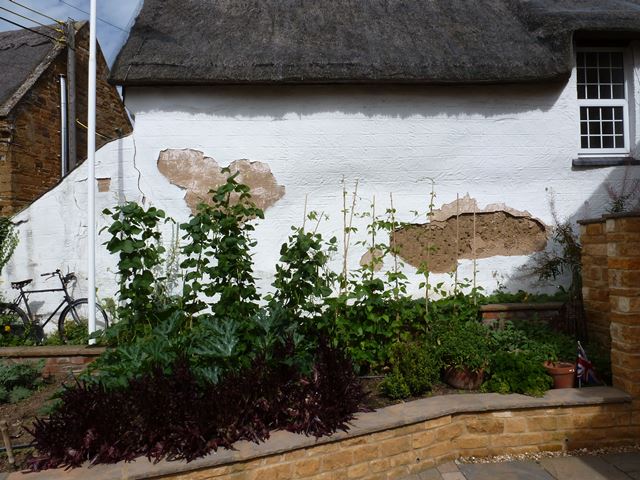 This house was converted from a cob barn in the 19th C. It has been rendered in recent times with cement render and has crude markings cut into the render before setting to mimic courses of stone! On top of the render a modern plastic paint had been applied. Both finishes were detaching themselves from the wall. A conservation engineer surveyed the property before any repairs were carried out. 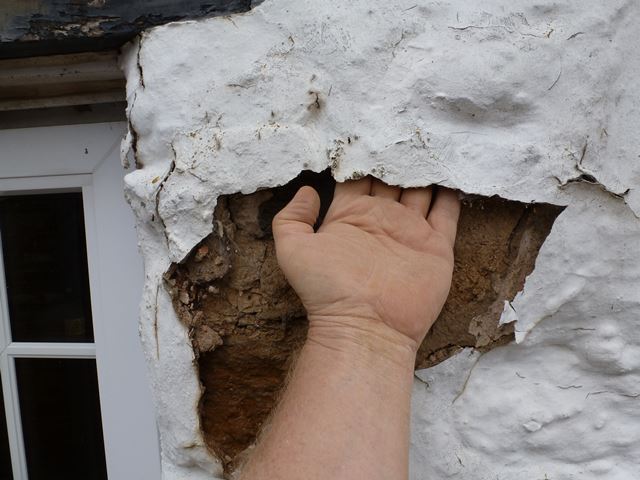 The plastic paint was blistering and detaching itself from the stonework as seen here. The stonework behind the paint was becoming friable and the mortar joints were crumbling!
This is a good example of why modern plastic paints should not be applied over historic fabric. The plastic paint had to be painstakingly removed from the whole elevation! To save excessive repointing a lime/aggregate slurry mix was applied over deep areas to act as a key for the new limewash. 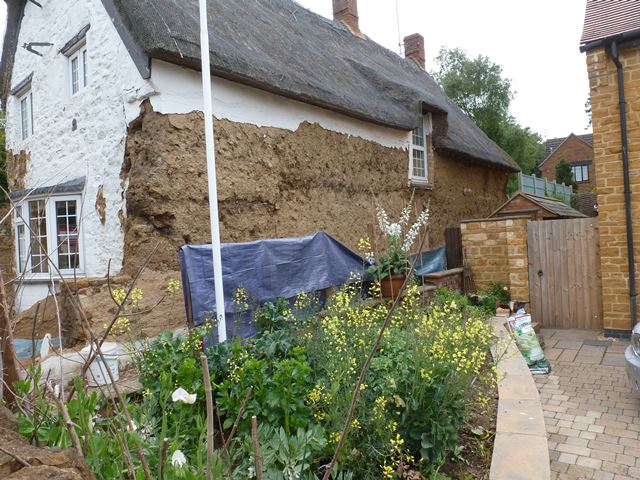 Side elevation with majority of the cement render removed.The front elevation is stonework. 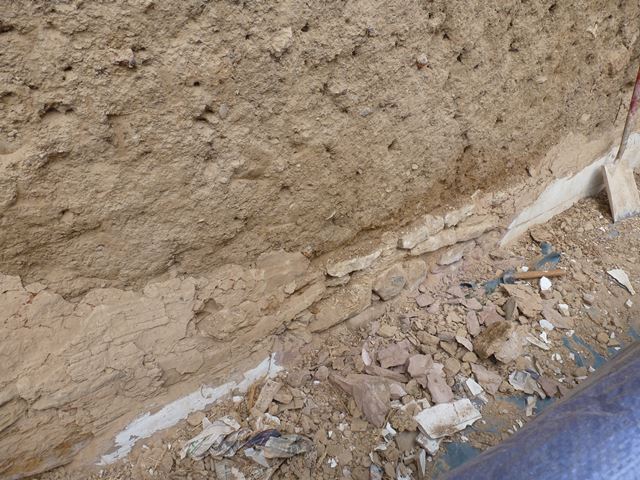 The cob walling stood on a stone plinth which had been rendered over. This allowed moisture to come into contact with the cob. The plinth should never be rendered over.

Two coats of lime render were applied onto the cob and followed the contours of the wall. The stone plinth remains exposed and will be pointed in lime mortar. 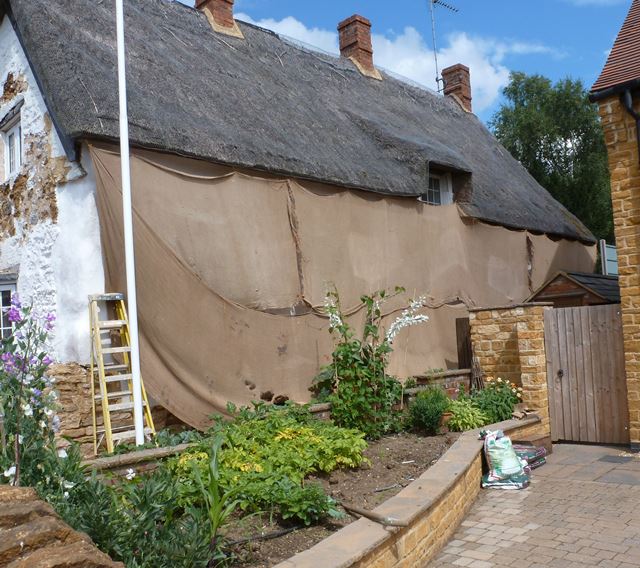 Due to the hot summer weather hessian sheeting had to be erected to prevent the render drying out too quickly. This also served as a shelter when applying the three coats of limewash to the wall. 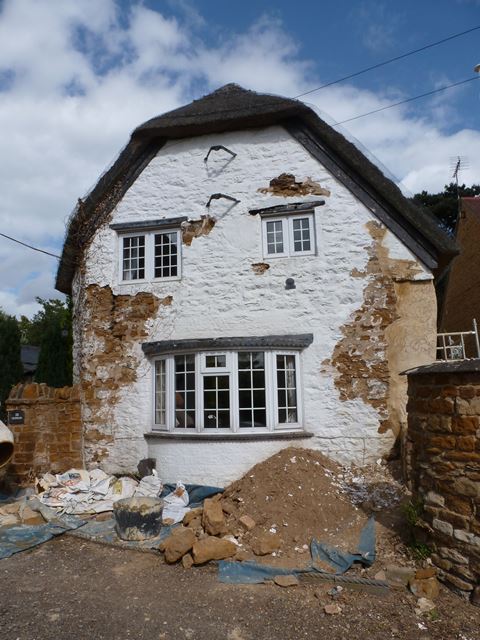 The front elevation of the property had been covered with a modern masonry paint. This was cracking and detaching itself from the fabric and the original mortar and stonework behind was deteriorating. it was not allowing the structure to breathe. 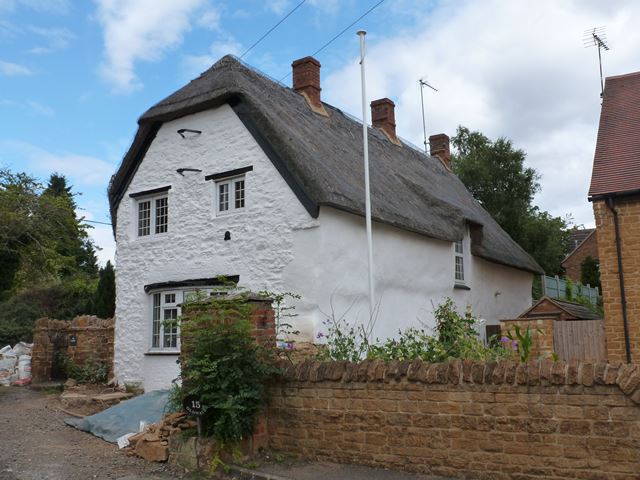 The front and side elevation of Oldways after three coats of limewash had been applied.

This timber framed house in the village has suffered from the use of inapproriate materials alongside the historic timber frame. Heavy cement render over brick infil panels has inhibited the movement of moisture which has caused the timber to remain damp and slowly decay. The house was leaning on the end elevation from back to front which complicates the repairwork. The initial plan was to remove the rotten elements and replace them with reclaimed English oak. The brick panels would not be replaced, but woodwool boards and sheepswool insulation will fill the panels which should acheive a superior U value. Then lime render and limewash will be applied to the internal and external surfaces. 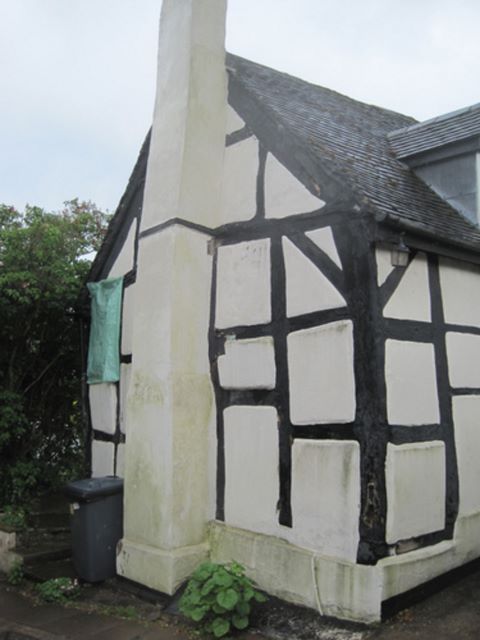 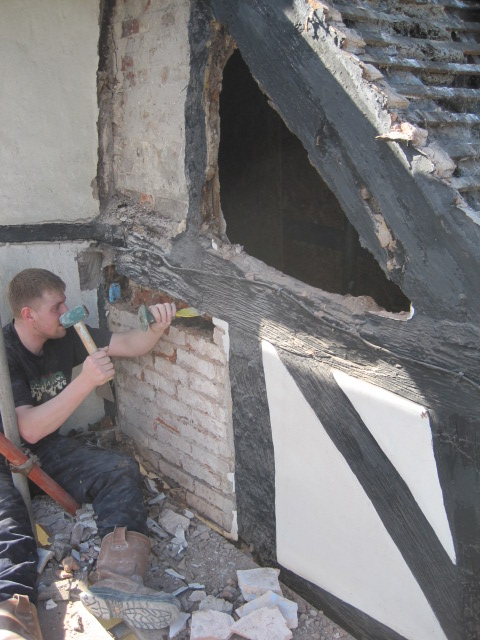 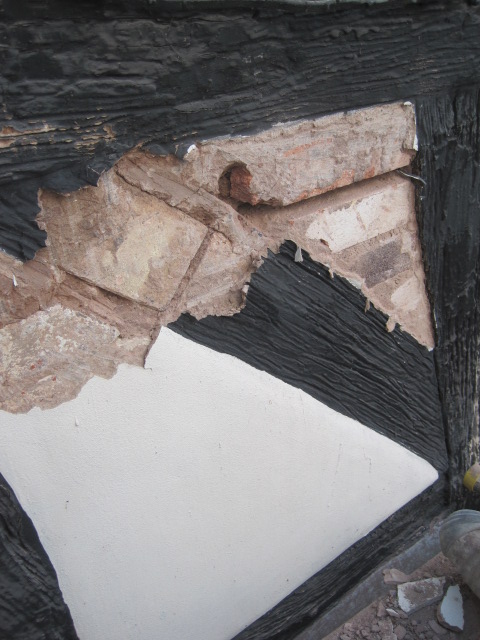 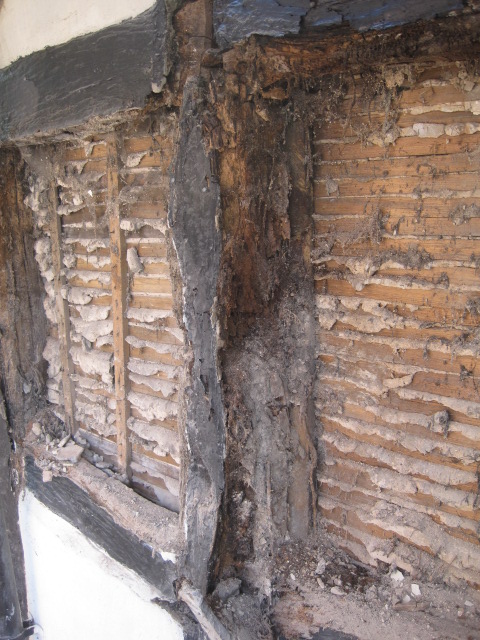 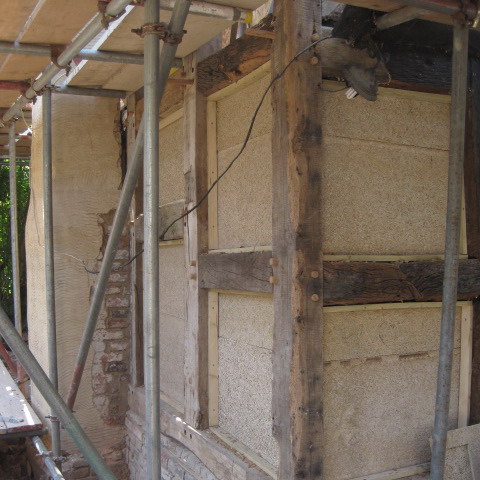 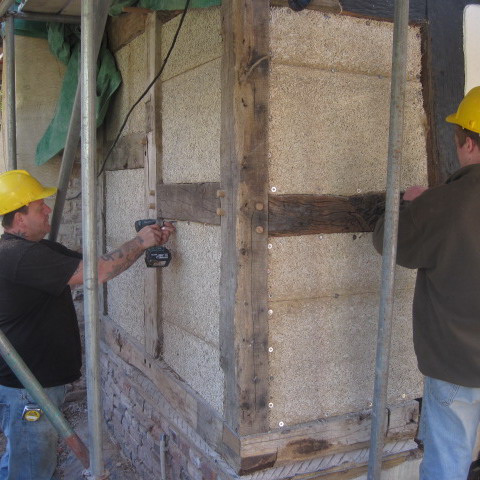 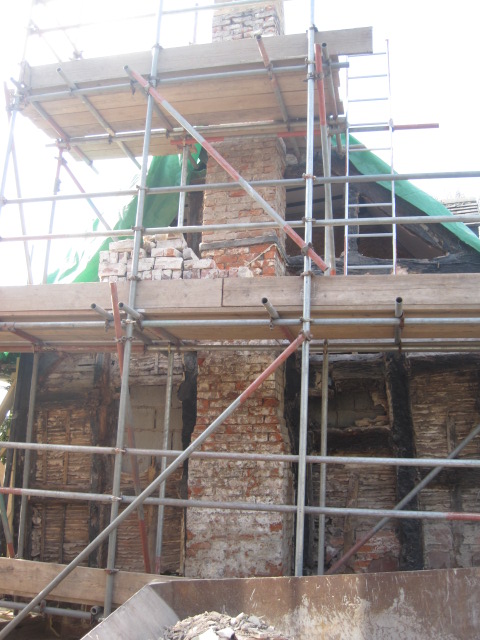 This Grade II timber framed Listed Building had been re-rendered in the 1980’s with a cement render!! This had cracked when the structure seasonally moved, these cracks then let water into the structure and into the property. 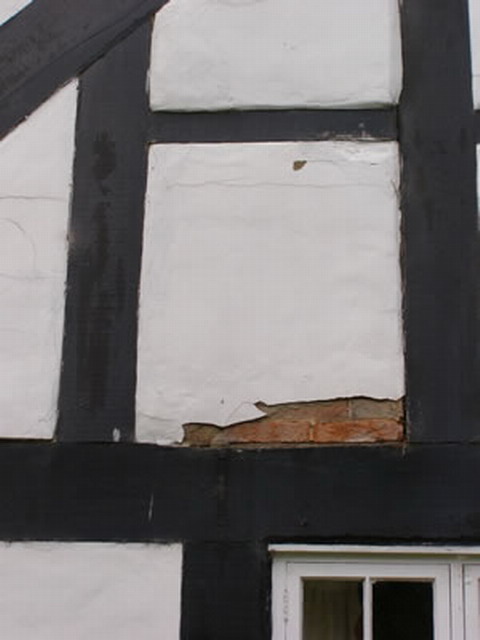 Loose brick panels prior to repair. 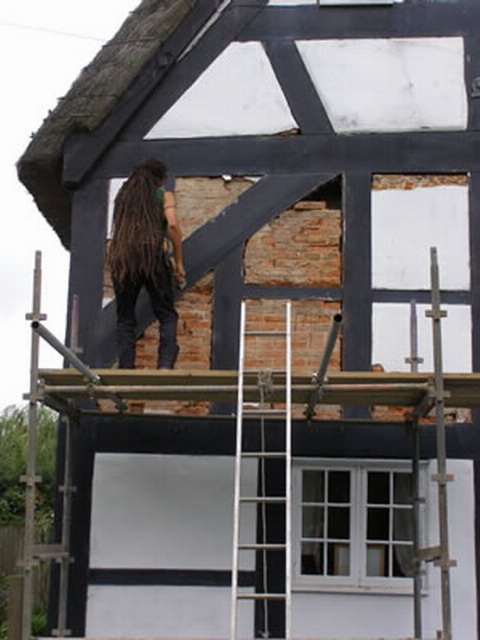 Repairs being carried out by “the hairy one”! 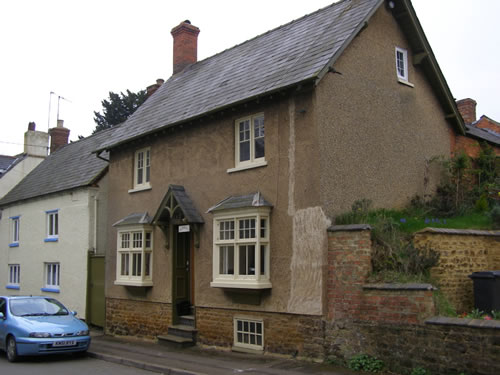 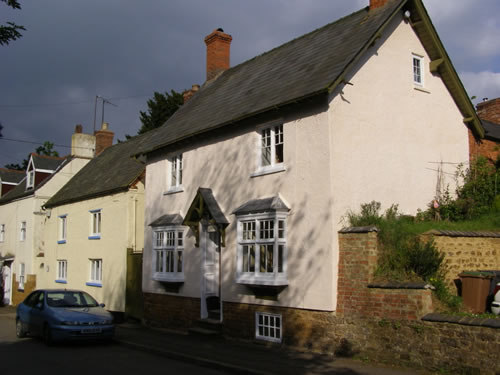 This property was limewashed with three coats of Buttermilk coloured pure limewash applied onto a porous background it will enable the structure to breath.

The house has been previously lime rendered onto a cob structure so any modern paint system would have been detrimental. 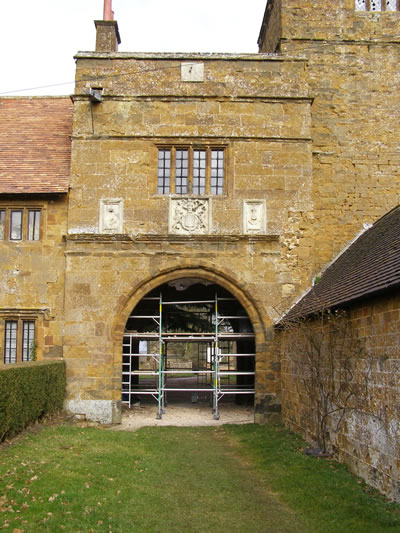 The Gatehouse and the Tower Cottage is a Grade II* Listed Building. It was built for Sir Robert,first Lord Spencer in 1613.

It is mainly Ironstone ashlar, with moulded stone cornices, string courses and parapets. The lath and plaster ceiling under the archway was in need of repair. Although the laths were in a sound condtion the plaster ceiling was taken down due to its bad state of repair. Traditional haired coarse stuff was used together with a lime rich top coat and limewash. 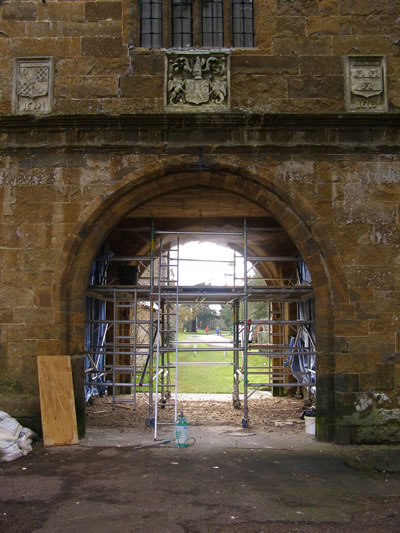 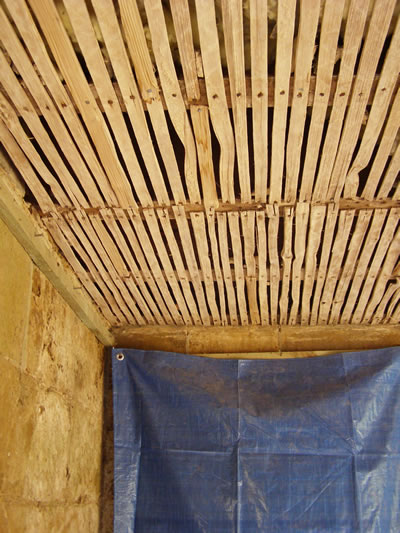 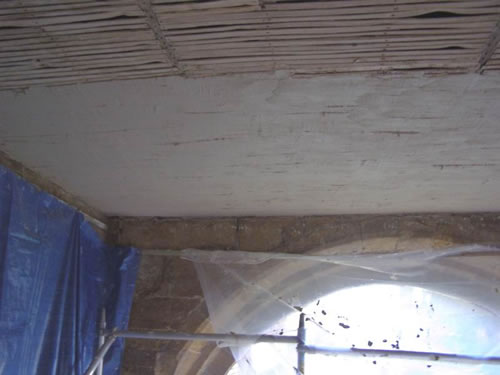 A haired lime base coat is being applied to the laths 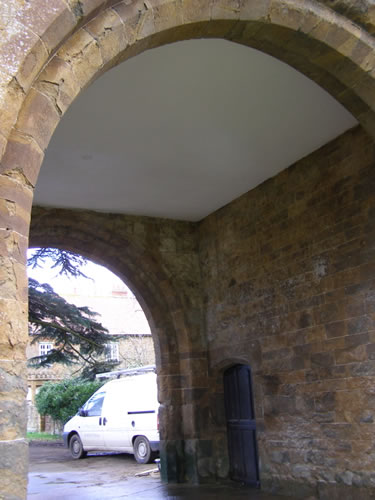 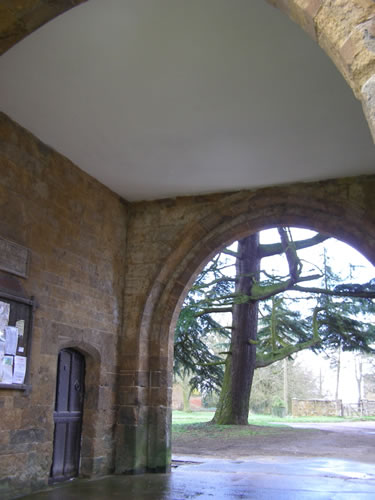